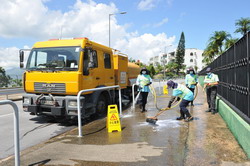 The Department and its cleansing contractors have a total workforce of about 13,200 to keep the city clean and provide cleansing services, including street sweeping, waste collection and other cleansing work in Hong Kong. Workers normally begin working at daybreak and continue until late evening. All streets are manually swept at least once everyday. In the main commercial and tourist areas, streets are swept an average of four times a day, and up to eight times a day in the busiest pedestrian areas.

Complementing manual sweeping are 10 nos. of contractor's mechanical sweepers used to cleanse highways, flyovers and central road dividers and other high-use traffic areas. These mechanical sweepers normally swing into action after midnight when there is less traffic. The Department and its cleansing contractors have a total of 115 street washing vehicles which operate day and night with the frequency of street washing ranging from on need basis to daily depending on the nature of the area served.

The Department has continued to contract out street cleansing services for greater efficiency and cost-saving.

To help keep Hong Kong tidy, about 11,400 litter containers and about 1,900 dog excreta collection bins are placed on the streets. They are cleared at least once a day.

During the year of 2021, enforcement officers of the Department issued over 50,900 fixed penalty notices against cleanliness offences. The cases involved a total fines of about $ 76.35 million.

To facilitate the public to report cases of the littering from vehicle, a Littering From Vehicle - Report Form (in PDF format) has been introduced by this Department. This form is obtainable at the District Environmental Health Offices and the District Offices of the Home Affairs Department.

The Department has installed Internet Protocol (IP) cameras at illegal refuse deposit blackspots (in PDF Format) to combat illegal deposits of refuse and improve environmental hygiene. The Department will closely monitor the targeted blackspots and suitably adjust its action plans in light of actual circumstances, including the relocation of IP camera in a timely manner, so as to enhance the effectiveness of enforcement actions. The Department would continue to combat illegal refuse deposits in a multi-pronged approach including enhancements in public education, street cleansing work and enforcement action.

The Department and its cleansing contractors operate some 275 modern refuse collection vehicles. Every day, about 6,130 tonnes of household waste is collected, including 1,020 tonnes from Hong Kong Island, 1,920 tonnes from Kowloon and 3,190 tonnes from the New Territories and outlying islands. They are taken to the refuse transfer stations or landfills managed by the Environmental Protection Department.

Roadside gullies are generally cleared manually every two to four weeks. Application of larvicidal oil is done on weekly basis as a precaution against mosquito breeding. Dirt and refuse taken from gullies are delivered to refuse collection points. Gully emptiers are used to clear gully traps on highways and flyovers where manual means will pose danger to life and limb. Such gullies are desilted once every six weeks. The Department currently employs 3 in-house gully emptiers and 6 contractor's gully emptiers to provide gully emptying service, and they are normally employed after midnight when traffic is light. The silt and dirt sucked up into gully emptiers are discharged at refuse transfer stations.

Conservancy services are still provided to some old tenements on Hong Kong Island where there is no sewerage system by 1 contractor's specially designed nightsoil vehicle. Furthermore, the department currently employs 4 in-house desludging vehicles and 4 contractor's desludging vehicles to empty sludge from septic tanks and aqua privies. Desludging service for individual members of the public is provided upon their requests and at a charge. Nightsoil and sludge collected will be transported to Sewage Treatment Works of the Drainage Services Department for disposal.

It is an offence to display bills and posters in any streets or public places throughout Hong Kong without the permission of the Lands Department and this Department, or in case of private land, without the permission of the owner or occupier. Every day, the staff of the Department will, in addition to patrolling the streets and removing unauthorized posters, take out prosecution action against any person found responsible for placing such posters.

Where a bill or poster is displayed on any private land or on any Government land, the bill or poster shall be maintained in a clean and tidy condition. 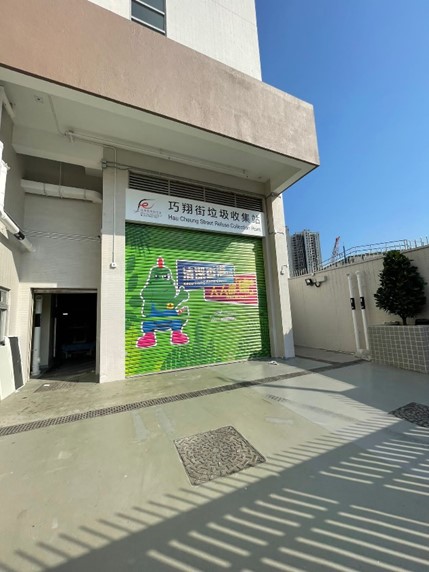 The Department has a total of 164 permanent off-street public refuse collection points (RCPs), 8 temporary RCPs; 886 village-type RCPs/RCPs with temporary structures; and about 1,960 bin sites. As regards the permanent off-street RCPs, there are 45 on Hong Kong Island, 65 in Kowloon and 54 in the New Territories and on outlying islands. New RCPs, which are visually attractive as well as odourless, are equipped with water scrubber systems, vehicle exhaust extraction systems and high pressure water jet cleaners. In addition, large-scale turn-tables are installed in certain RCPs to facilitate the in and out movements of refuse collection vehicles.

Refuse collection vehicles of the Department and its cleaning contractors will collect household refuse at least once a day at public refuse collection points which are generally in operation from 7:00 a.m. to 3:30 p.m. For those in busy areas, the operation hours are extended to 11:30 p.m.. All RCPs receive household refuse during operation hours. For other category of wastes, public should deliver them to landfills / refuse transfer stations managed by the Environmental Protection Department or public filling facilities managed by the Civil Engineering and Development Department.

"No Illegal Dumping of Wastes"

All public toilets are open 24 hours a day and are cleansed at least twice a day.

The main features of modern public toilets are as follows :

In order to upgrade old public toilets to the latest standard of provision, the Department has embarked on a programme of improvement. In 2021, 57 public toilets have been upgraded. 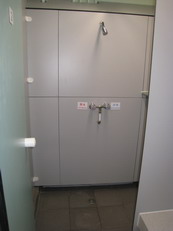 In older districts where poor housing accommodation still exists, the Department provides public bathhouses, of which 6 are on Hong Kong Island, 10 in Kowloon and 10 in the New Territories and on outlying islands. Currently, cleansing services for public bathhouses are contracted out.

At present, the following specialized vehicles are used by the Department in cleansing services: